I’m Rob, a normal guy who enjoys making models. Like many people I built models as a kid, but moved away from the hobby in my teens to concentrate on more diverting pastimes. I returned to model making a few years ago and before long I was hooked.

I’m by no means an “Expert” or “Professional”, but most of the time my models turn out well. I’d like to think that with a little care and attention most people could achieve similar results. For me, the enjoyment of the hobby is getting a little better with every build.

In my reviews I will do my best to tell you the good and the bad points of every kit I build*, tell you about the potential pit falls and maybe help you avoid some of my mistakes.

I will do my best to inject a degree of humour where I can too.**

So put the kettle on, your feet up and enjoy my latest effort.

*Views and opinions are my own and not that of Jadlam.
**Humour and jokes may not actually be funny. 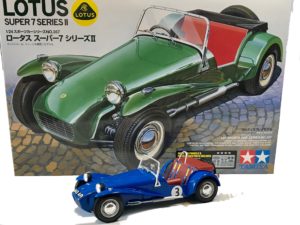 The diminutive Lotus 7 will be familiar to anyone with a passing interest in cars. it’s been in production since 1957, so must be one of longest running production cars in the world as new examples can still be purchased from Caterham cars in the UK.  One of my aims in life is to build a 7 at some point (only a few years left on the mortgage), so when I had a chance to build Tamiya’s latest version I jumped at the chance, well actually I sad yes please.. (it wasn’t quite exciting enough to make me jump) 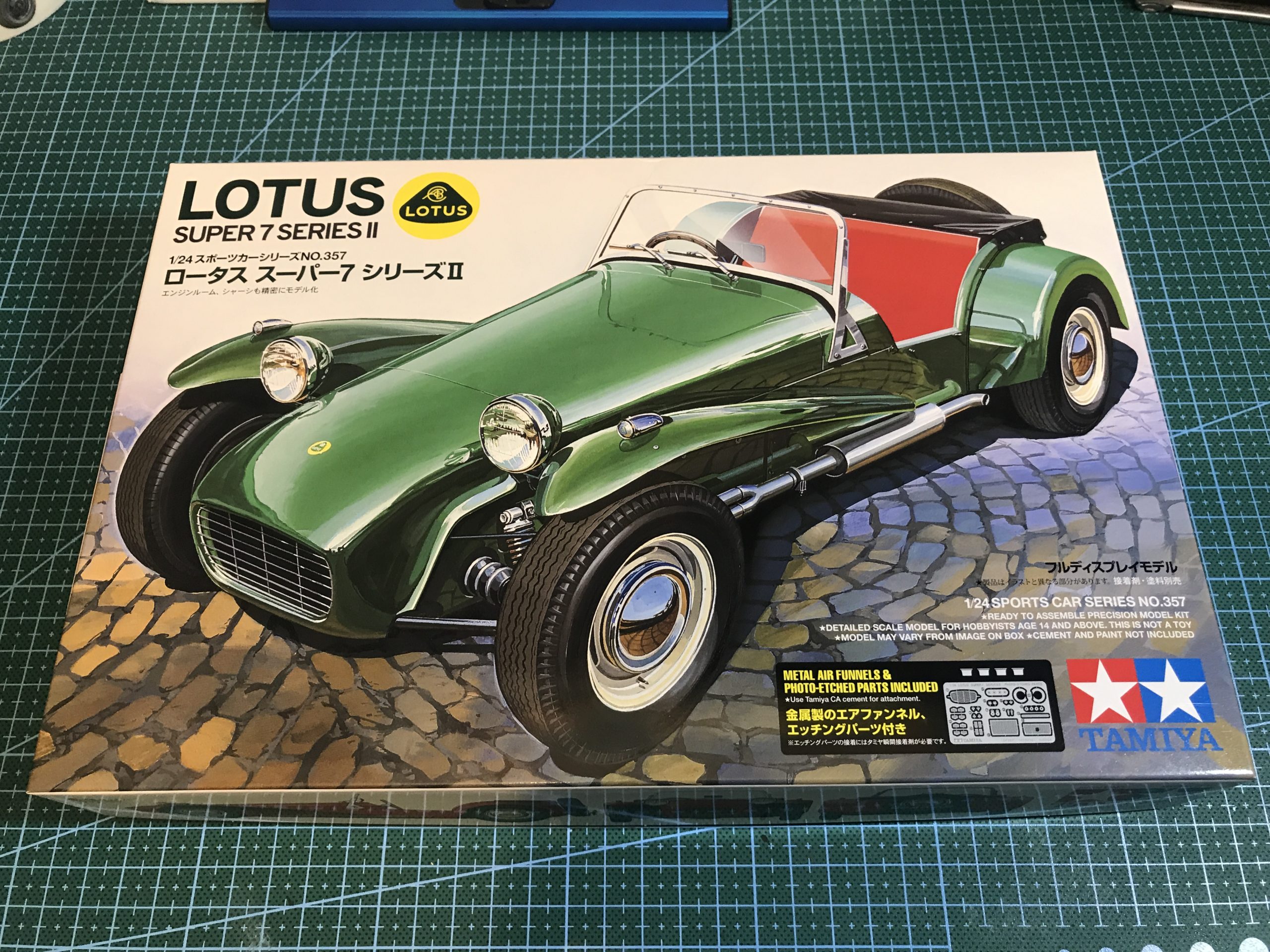 First released back in 1984 this is a fairly elderly kit and actually one I remember building myself in the late 80’s / early 90’s. This new version comes with the exact same box art as the original release, but also with the promise of some new parts too. These are a fret of photo etch providing a front grille, details for the radiator, brake discs and buckles and fixings for the harnesses. The harnesses themselves are effectively sticky labels providing you with a choice of three colours for the harnesses and three manufacturers. As with all Tamiya kits you’ll need to get your scissors or scalpel out because they aren’t die-cut, come on Tamiya more “budget” manufacturers do it why can’t you? Still they get so much right I can forgive the odd omission.

Lets take a look at the sprues. The first (and main) sprue contains the lion share of the parts including the main body tub, bonnet, nose cone, engine, transmission and all of the interior parts. The second sprue is mainly suspension parts and ancillary items, with the third sprue for the clear parts, for the lights and options for a proper windscreen or smaller aero screens for the club racer version. Snd finally the chrome sprue is for headlight parts and hub caps.

Now the interesting part. The photo etch. As mentioned before its mainly to add a bit more detail to the existing plastic parts and some harnesses. 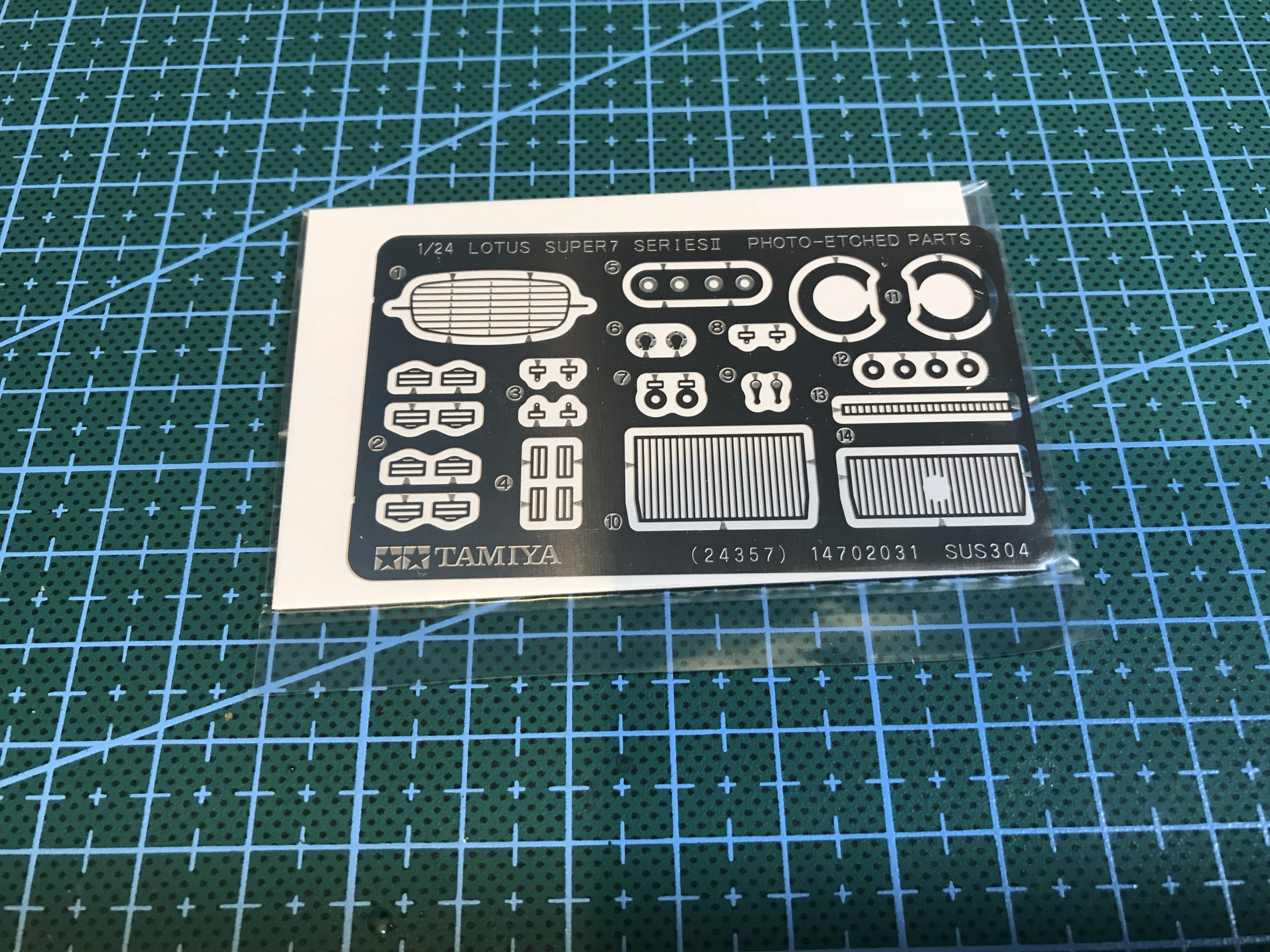 You also get some turned aluminium intake trumpets for the engine. These are so small that initially i thought they had been missed from my kit, but I found them in with the chrome parts. 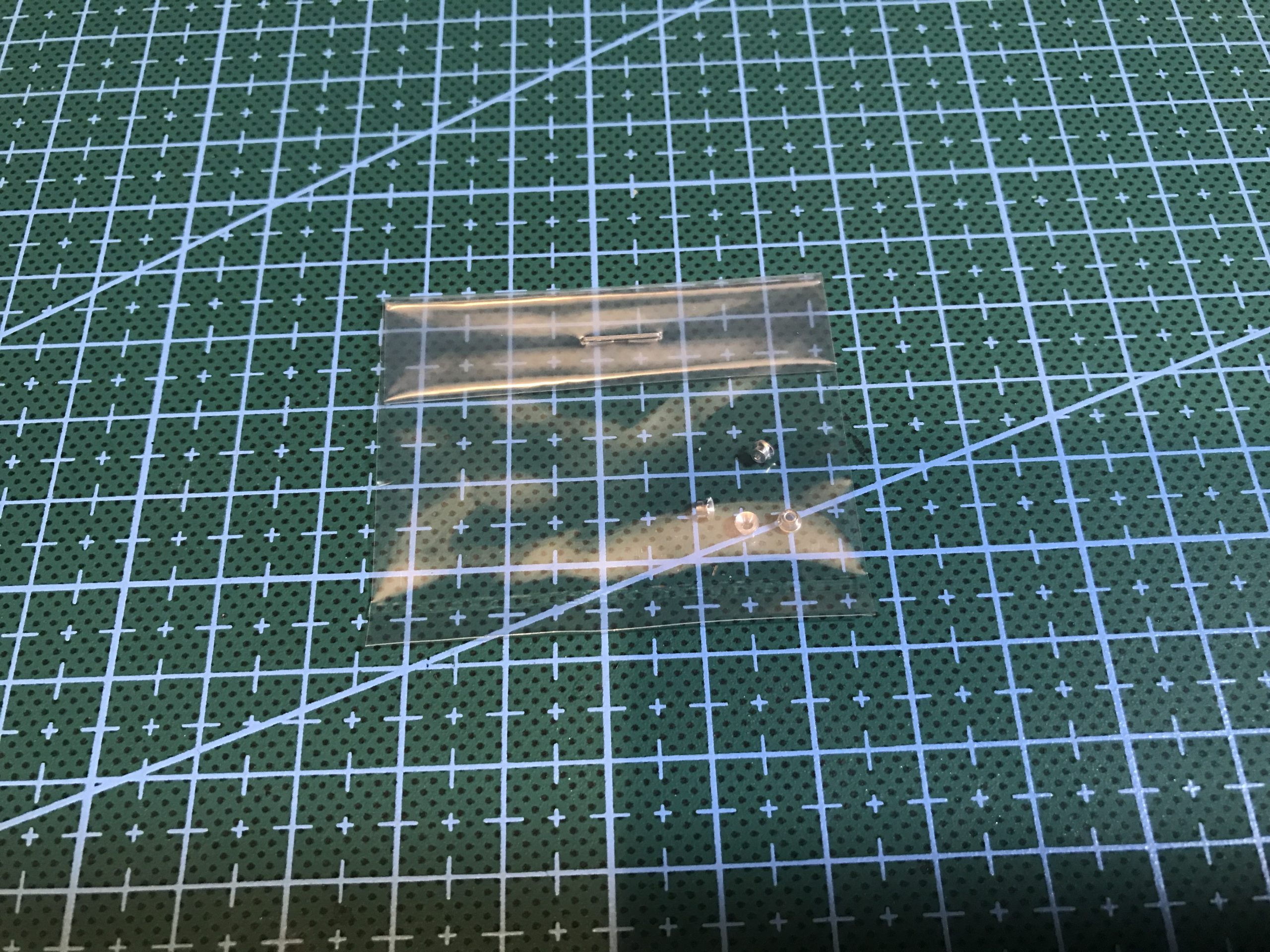 once again as mentioned before the harnesses are basically a sticker sheet, which you need to cut out yourself. A bit of texture to make them seem more like material would have been really nice. 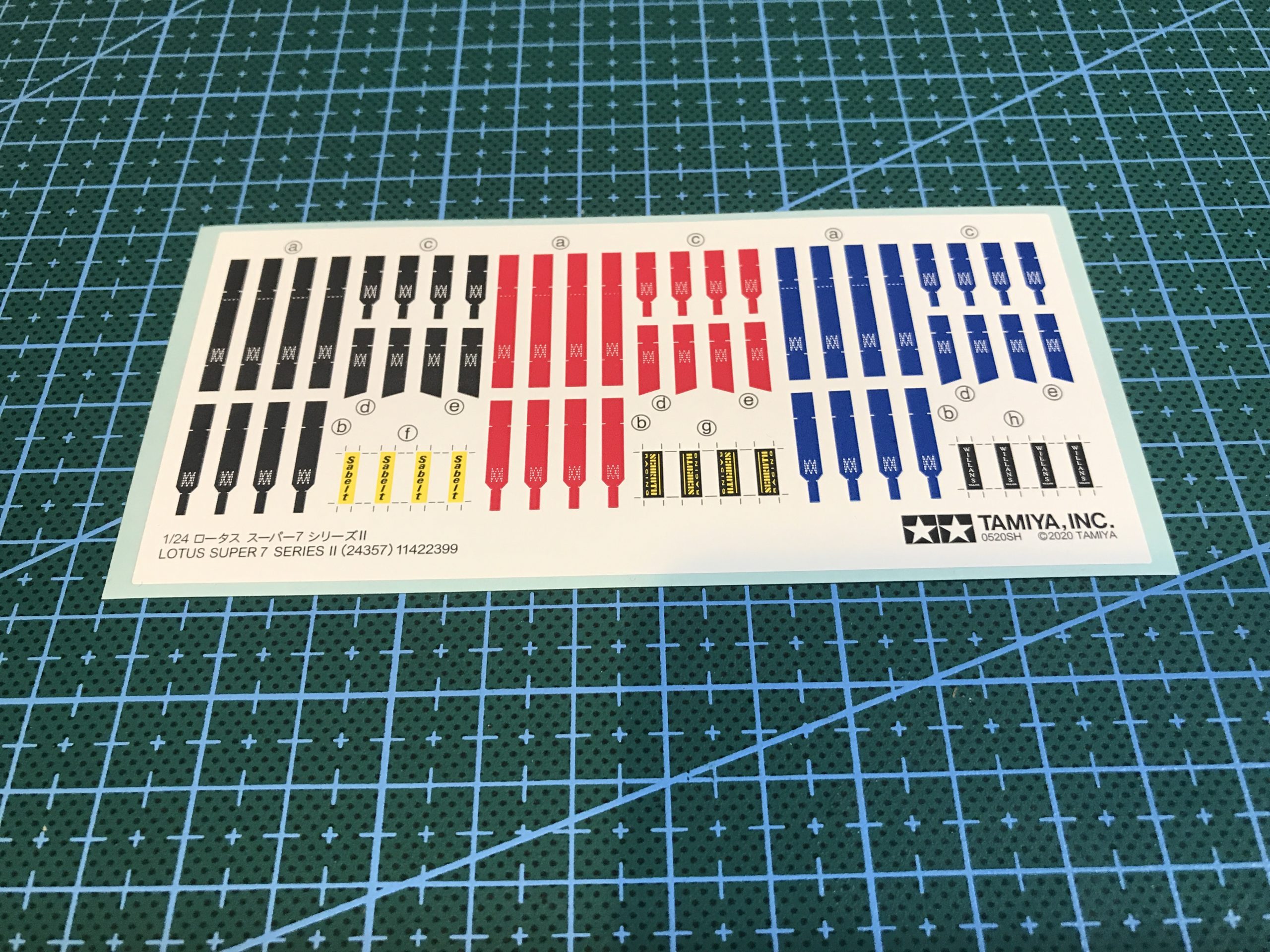 I can’t really say too much about the decals. they are so simple it would be difficult to get them wrong really. 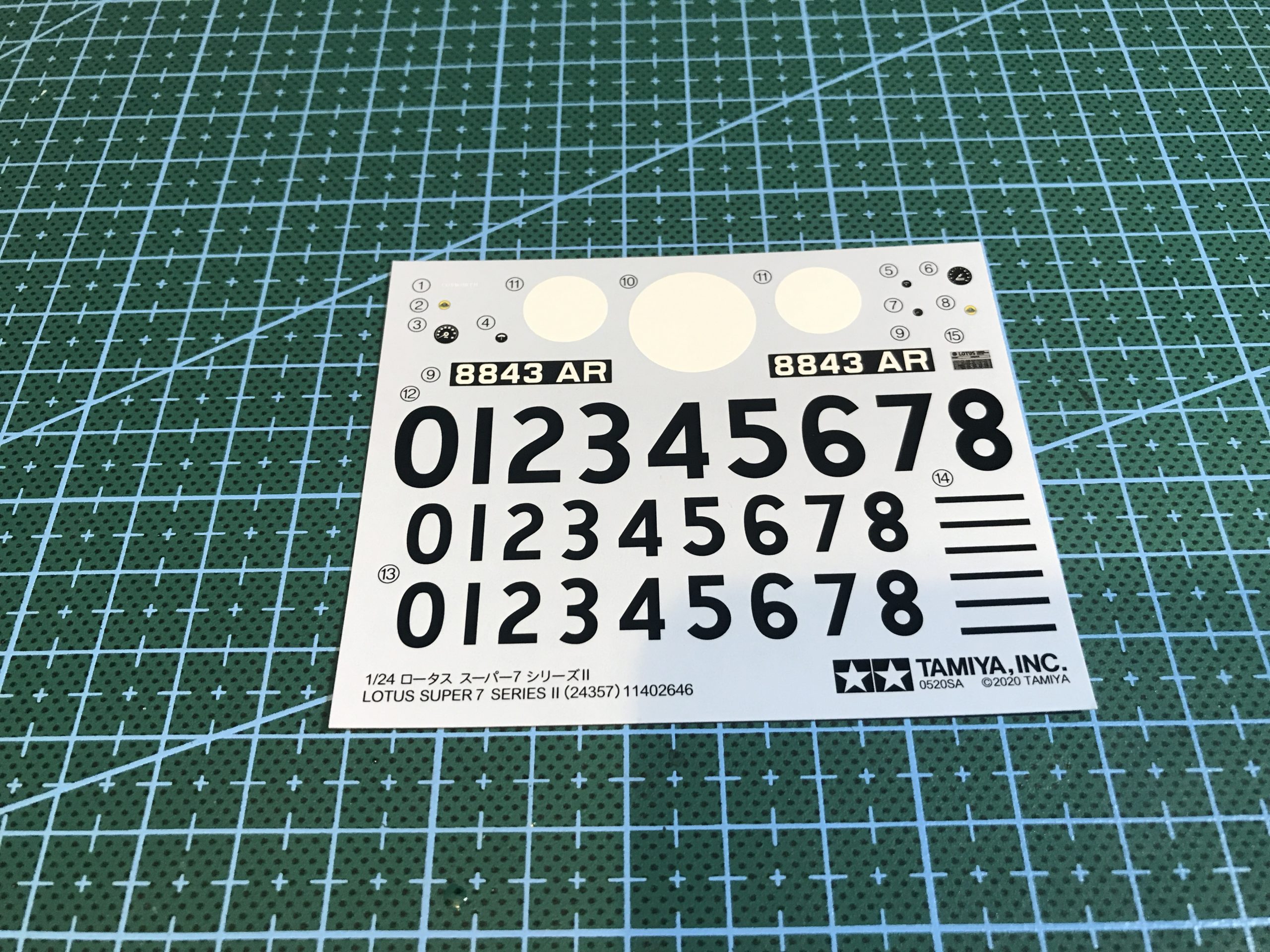 some nicely moulded tyres finish up the kit parts. 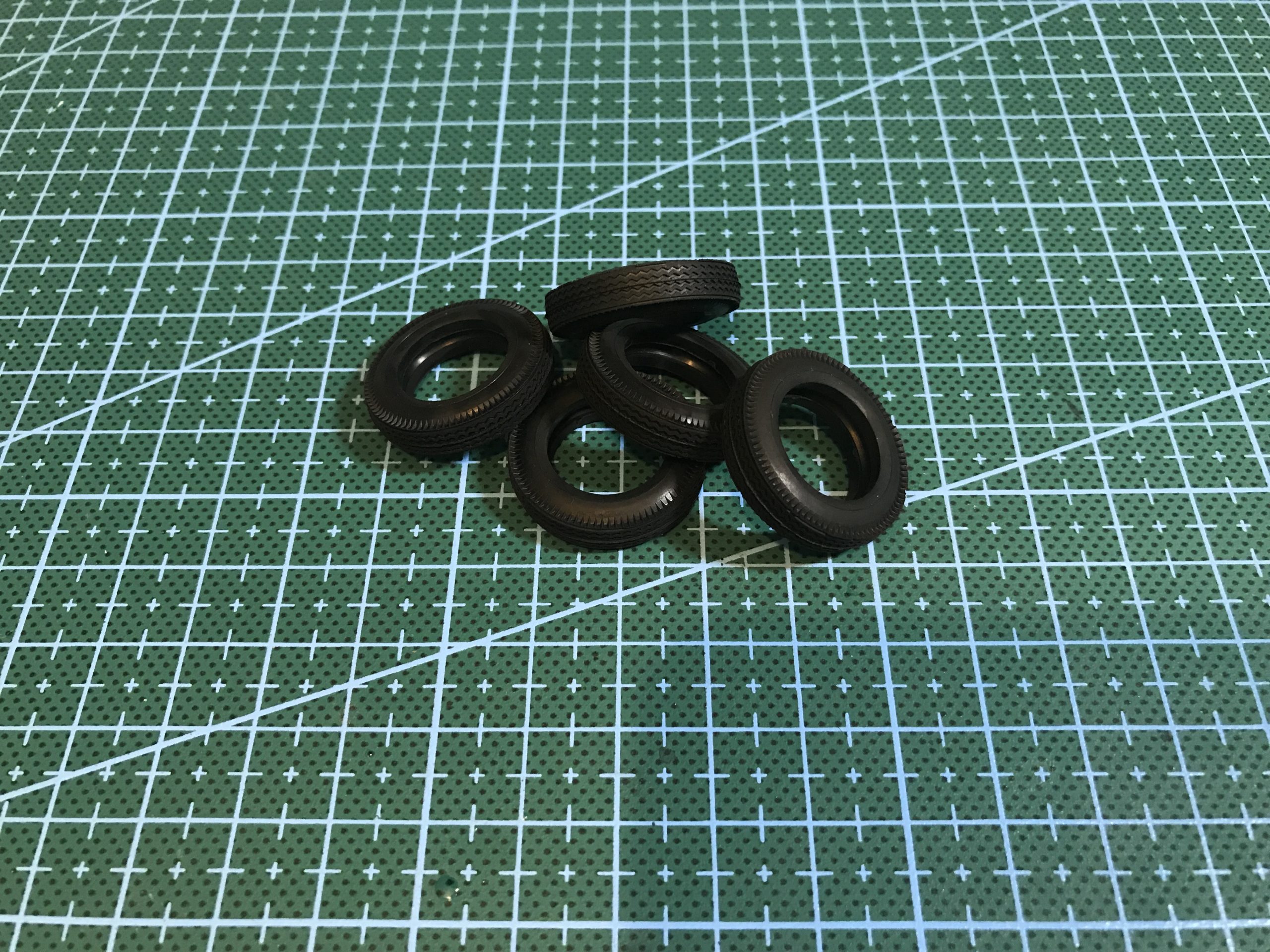 A relatively new thing is the addition of the modelling tips sheets that a lot of manufacturers now include. Tamiya haven’t failed in that regard here.

Instructions are how I remember from thirty years ago, but must be new as they detail the additional parts.

All in all Still a nice kit, but maybe lacking the level of finesse we expect from Tamiya’s new tool offerings.

The first thing i do with car kits is to figure out what parts are going to be the main body colour. The idea is to paint these right at the start and give the  paint plenty of time to dry prior to assembly. 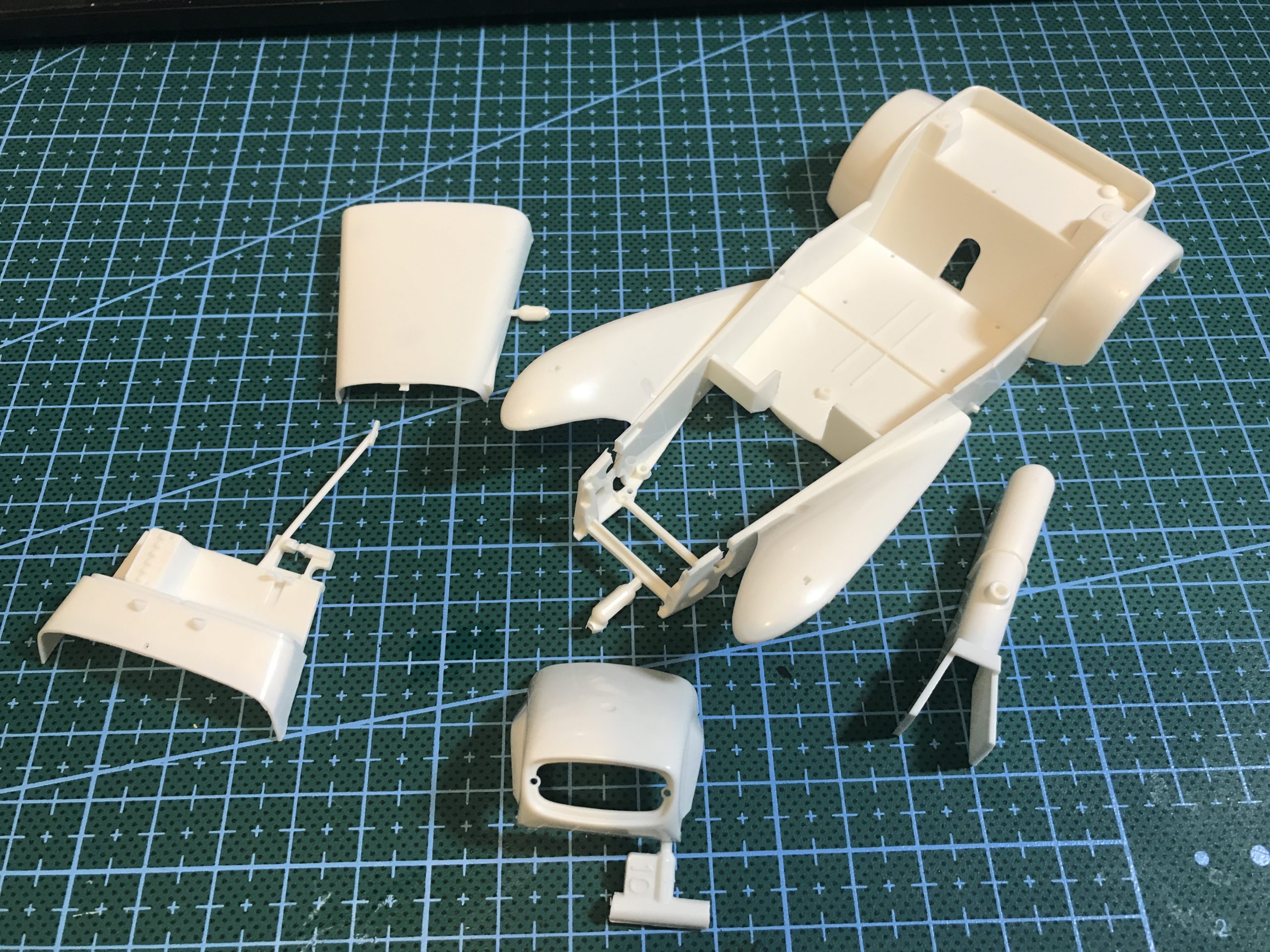 Now here’s a little story. I went through a bit of a process when it came to the paint on this model. My first thought was to paint it in the colour scheme of number 6’s car from the prisoner TV show. I had a whole idea of doing the review around that theme. It was going to be funny…. Well at least in my mind. That idea was abandoned for a number of reasons, mainly due to the fact that wink, wink references to a fifty year old cult TV show wasn’t exactly the zeitgeist for 2020 Britain… I ask you; who could possibly relate to a dystopian society where people are held captive in your own home….

Soooo. A fictional scheme it would be. I started by painting the parts in dull aluminium as a base coat and primer. 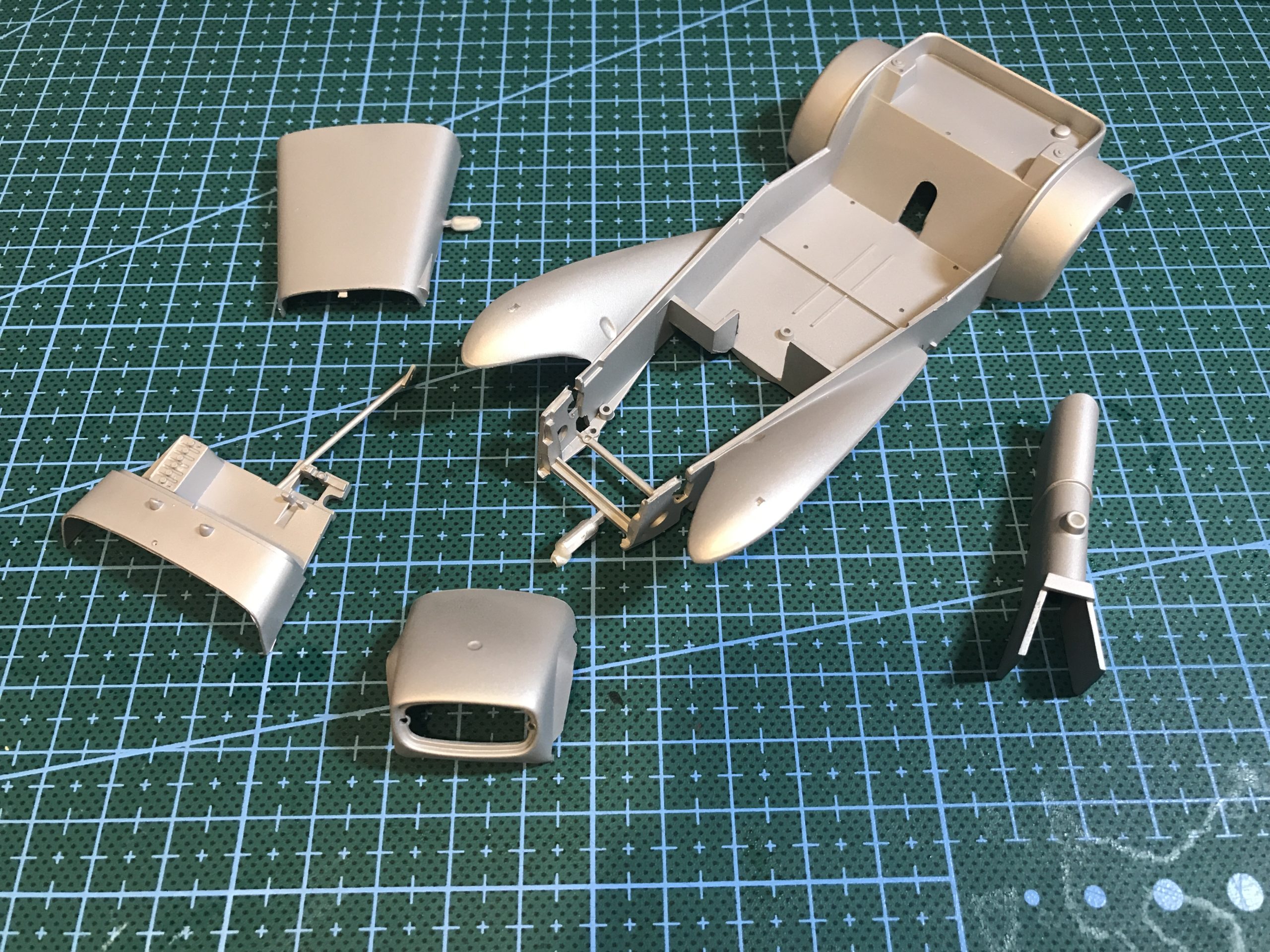 I eventually decided on Blue (mainly because I’m running low on paint and I had enough Tamiya Pure Blue) My first idea was to a dual colour scheme of bare metal and blue and even got as far as  trying it out.

It looks better in the pictures than in person, so I decided to paint the whole of the exterior in Blue.

While I left that to dry I went about painting the rest of the parts and looking at the new parts in the kit.

I decided to start with the harnesses as I have a phobia for PE (photo etch) and wanted to get this out of the way. I made a real effort to think through my approach to the PE. The first thing was to assemble the buckles. Each buckle comprises five  tiny parts, shown below prior to clean up. (that took some doing..) 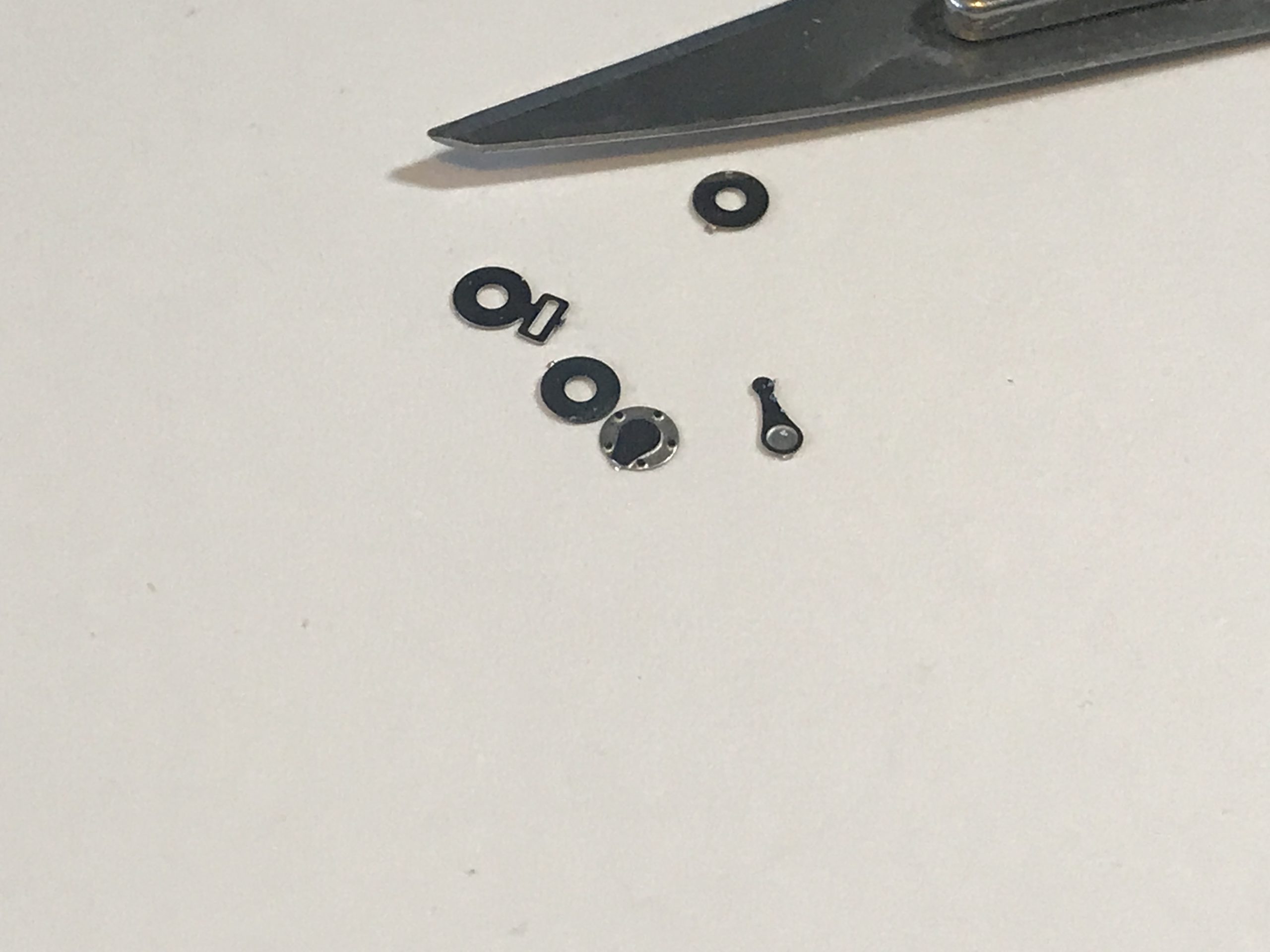 I assemble the washer shaped parts on the end of a cocktail stick with the minimum very thin super glue. You may notice I had been painting the body just before this…. 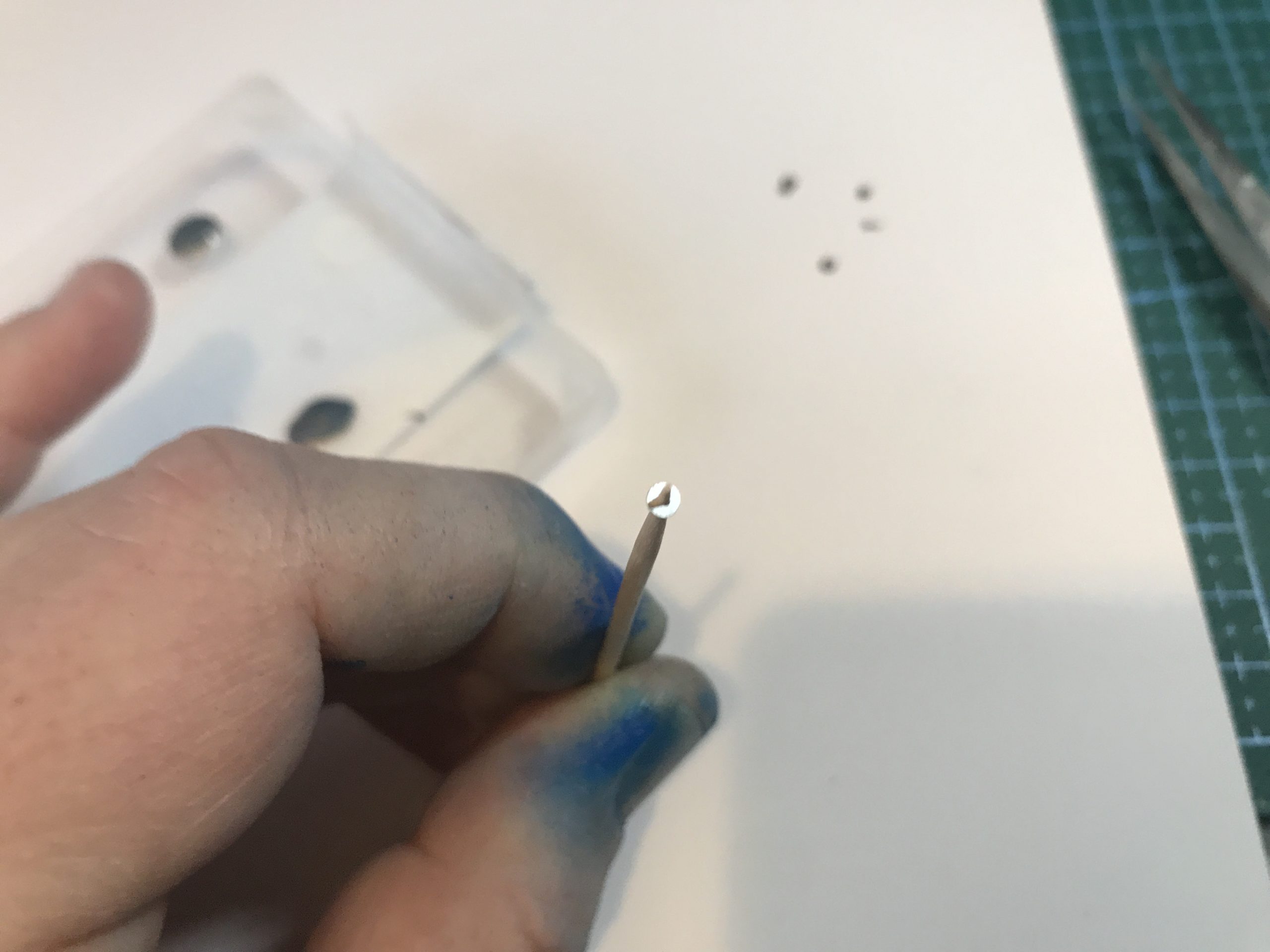 It took a steady hand, but I was pleased with the outcome. 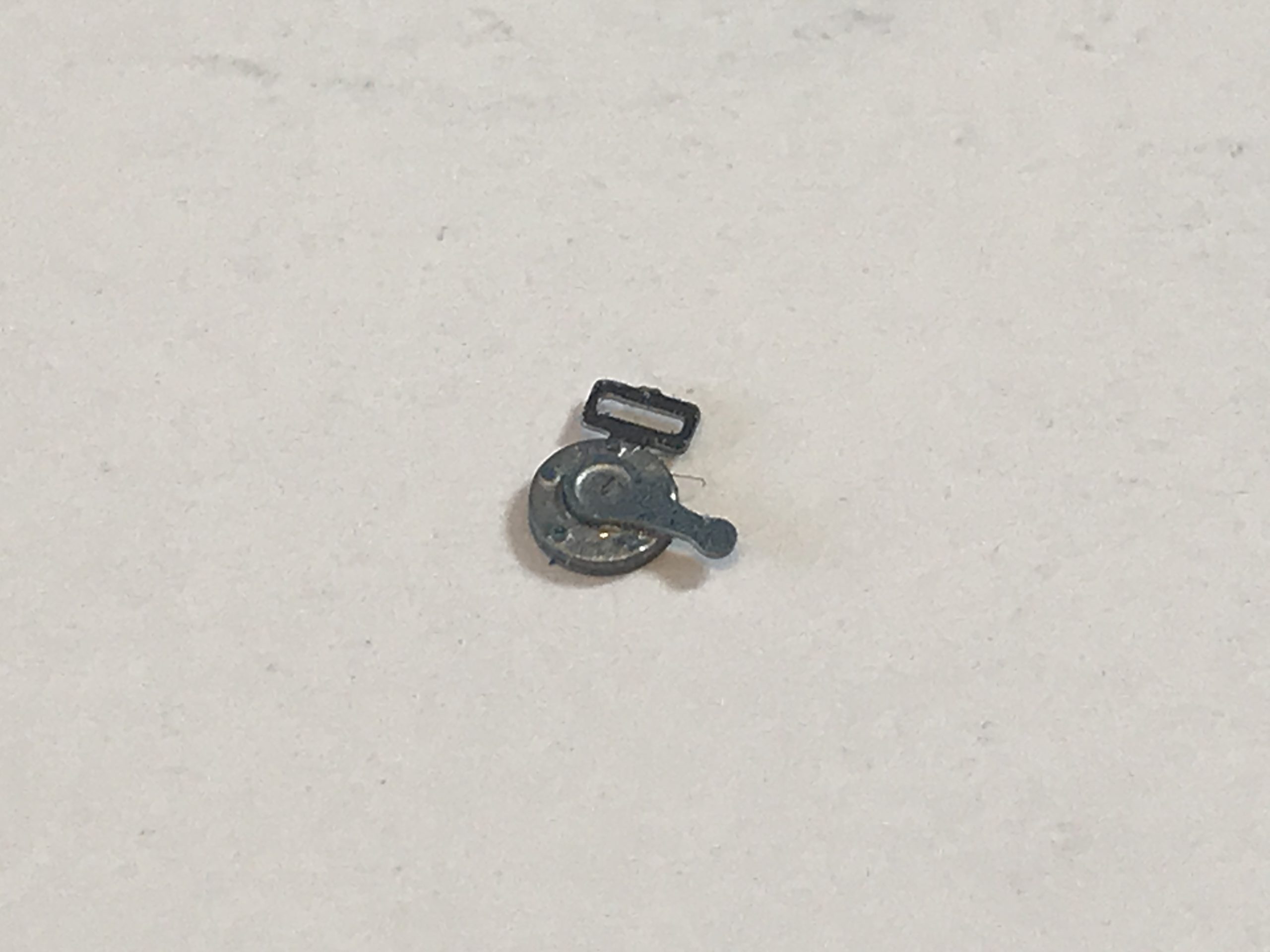 This could then be assembled to with the harness strap. 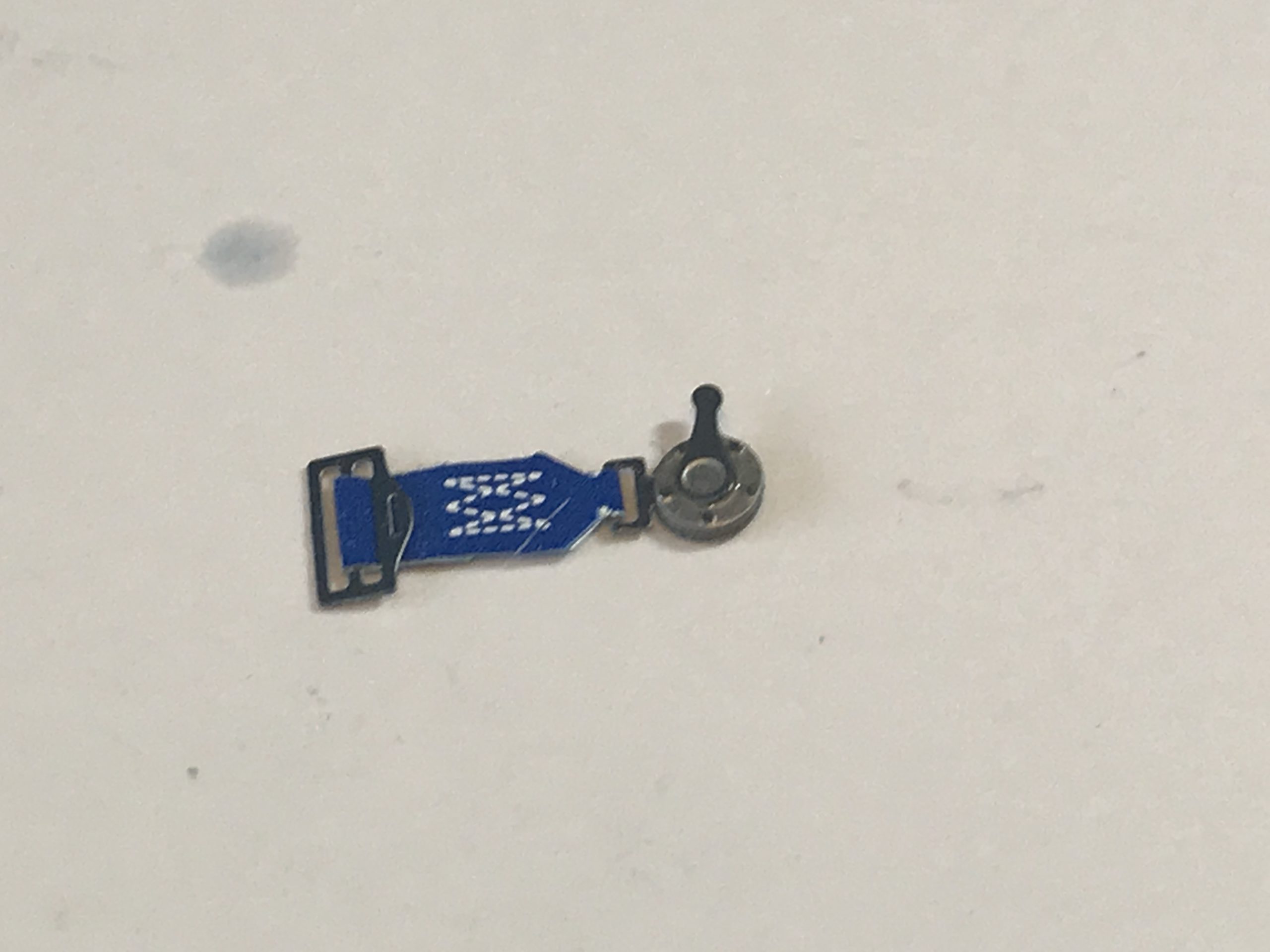 To complete all of the harness parts took the best part of an afternoon. It wasn’t too hard and to be honest i could probably do it better next time, but the result is far superior to decals.. 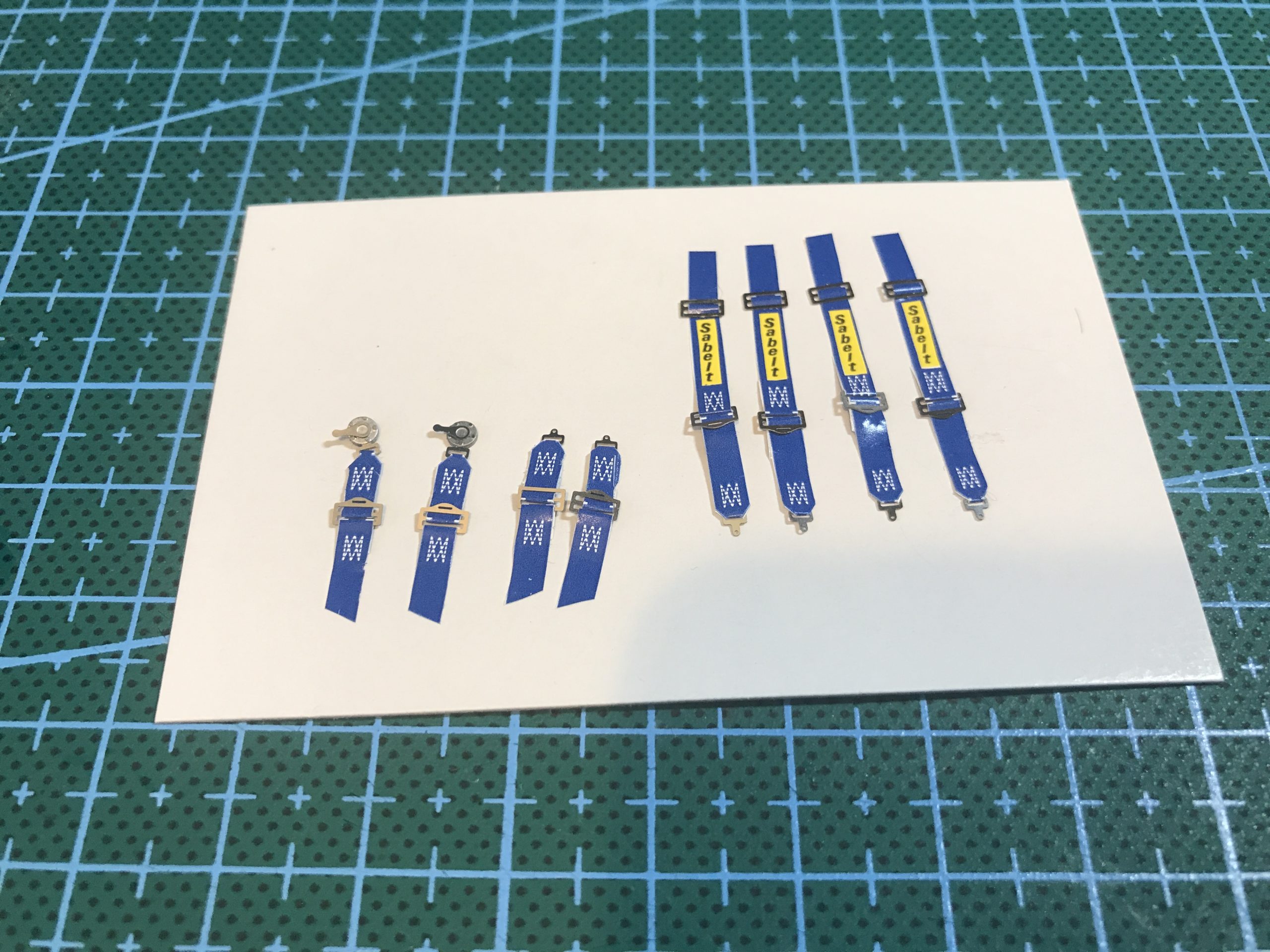 Pleased to have completed that mini project I turned my attention to the engine and running gear. You have all seen this sort of thing before, so lets go for a montage.. cue the Rocky music.

Before you press play. I forgot to mention that I added some HT leads between the distributor and the engine block. I made these from some lead wire and superglued them in place. It’s a pretty easy addition and adds quite a lot to the finished model in my opinion.

You may now proceed with the music.

With the engine done I was feeling pretty good as everything was going well. Next I had to decide upon the interior colour. I decided that a dark red might look pretty good, so it was just a simple case of painting the seats with the airbrush.

I then installed the safety harnesses. I had to secure them in place using a drop of superglue.

Once installed on the seats I couldn’t resist a trial fit on the interior parts.

Now the exterior paint was nice and dry I masked up and painted the interior of the car in gloss aluminium.

The spectre of PE once again rears its ugly head. This time for the radiator. There are just three pieces that are added to the original plastic  part to provide a bit better detail. I think you could leave these off and by the time it’s painted no body could tell.

Whilst I had the PE fret out I had a go at the front grille. I had been putting this off a bit as this is easily the most important part of PE. Get it wrong and the model would be spoiled. Fortunately it went okay.

So it was now a case of working through all the various parts, painting them and making sub assemblies. I will spare you a detailed account, but show you some pictures.

Now all the parts were painted I laid them out to review my work. It also looks a bit like a real life kit before assembly. 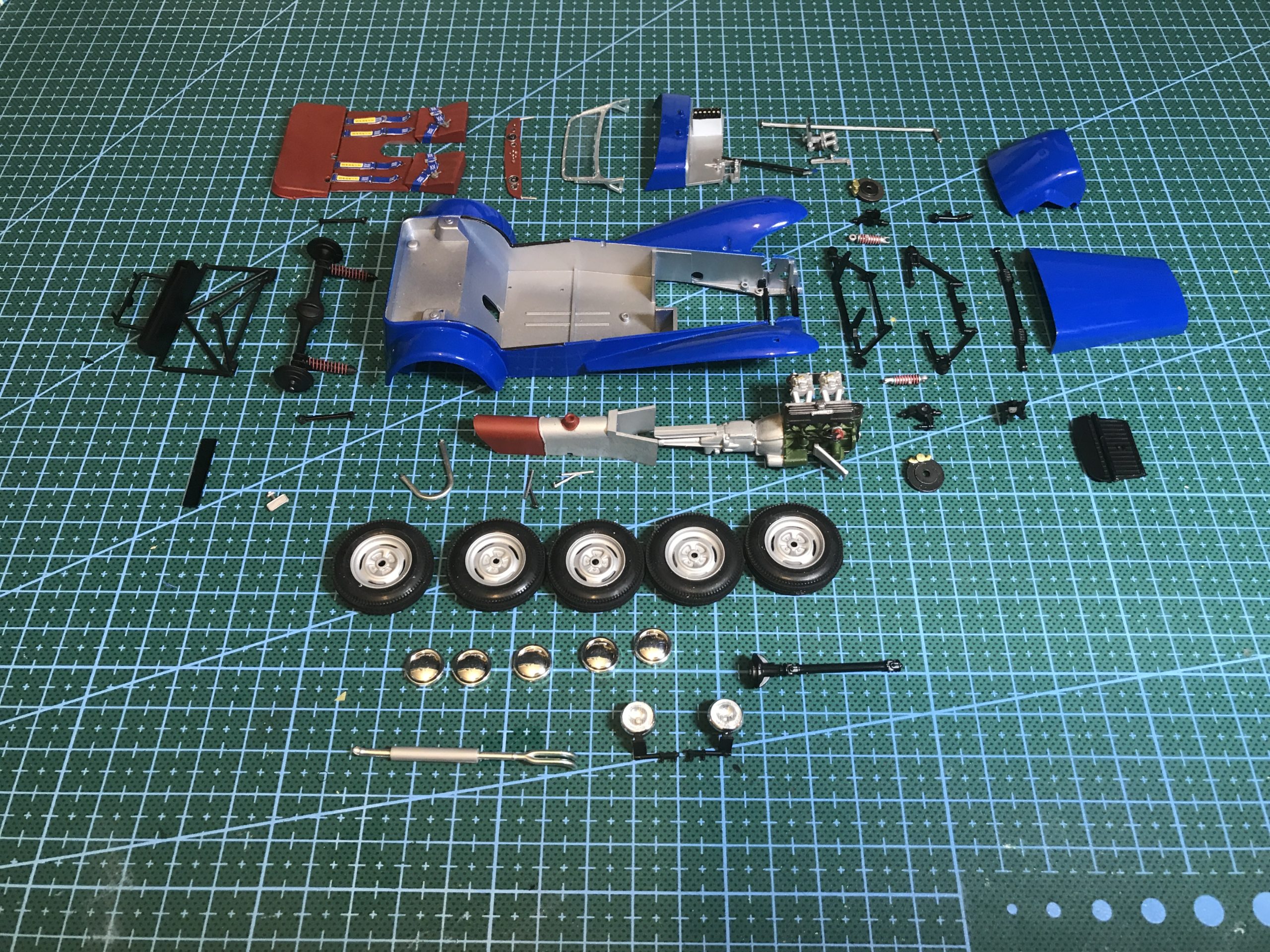 Time for an assembly montage.

No dramas with any of that… And so to the finished article.

As always with me it isn’t perfect, but looks pretty neat.

I guess around ten hours or so, I really must time these things. Let’s just say a perfect weekend project.

Basic tools for the most part but a few points worthy of mention.

it’s quite interesting that the addition of a few new parts can rejuvenate a kit, but it works. Tamiya deliver once again.

Whilst not quite as well engineered as the newer kits this is still simple enough for even a beginner to have a go at and produce a reasonable result.

My only complaint is that Tamiya should produce a kit of the current Caterhams.. I guess I will just have to carry on saving for the real thing.

Want to build this kit yourself? Order yours here at jadlamracingmodels.com. Looking for more model kits? Explore our massive range here!